Tomatoes From Seed to Sauce – Part 3 – Tomato Characteristics – What Does That Word Mean? 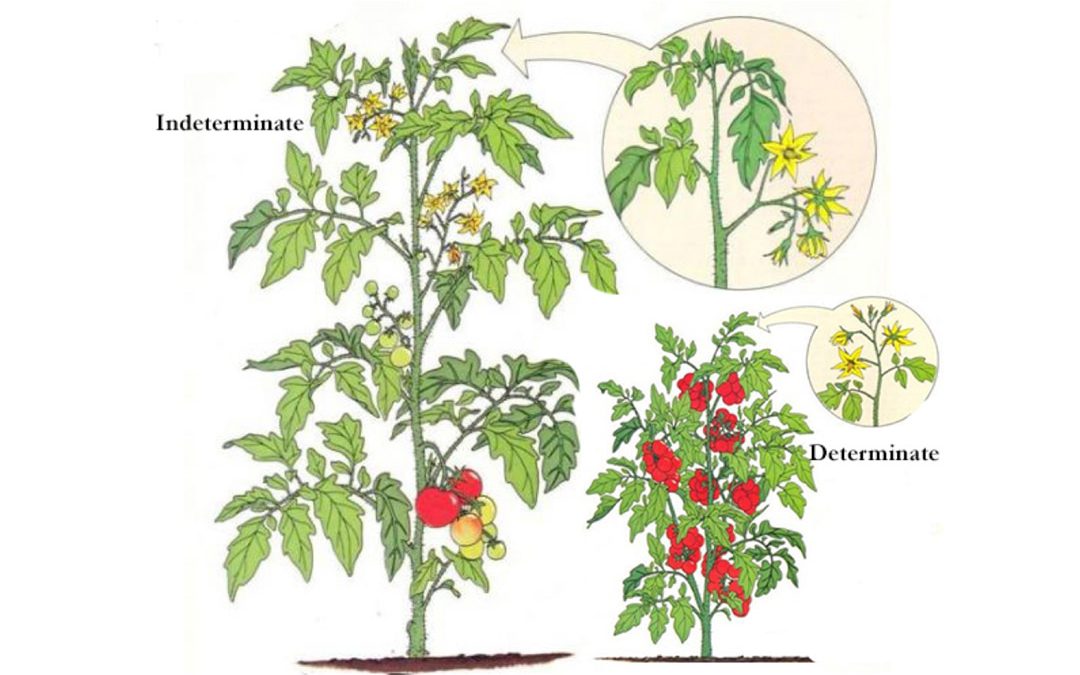 Determinate or Indeterminate? Tomatoes are classified by how they grow. Knowing this is an important factor to consider when choosing a variety.

• Determinate (D) varieties are sometimes called bush varieties and tend to grow shorter, fuller and most of their fruit will ripen over a short period of time. They also tend to ripen early in the season. This can be a good choice for containers or processing. The key characteristic for a determinate variety is where it produces flowers/fruit; which is at the terminal growth point of each stem. As a general rule, these plants should not have the suckers removed (pruned) since each of those young branches will produce a cluster of fruit on the end. If you remove all those “sucker” branches, the plant will only produce fruit on the top. All determinate varieties have a life cycle pattern built into their DNA. During the first stage of growth all the stems, most of the leaves and a few flowers are produced. Followed by a flush of flowers as the leaves mature in the second stage. Next, during the fruit expansion and early ripening third stage, no new leaves will be produced. The fourth stage is when most of the fruit ripens, and many of the leaves will turn yellow and die. This is natural; the plant is putting all effort into ripening the fruit. Although shorter, these plants will require support because they will be heavy with fruit all at one time. A sturdy tomato cage is often enough.

• Indeterminate means the height is un-determined. These varieties can grow very tall and tend to ripen mid to late season over a long period of time. These plants produce their flowers and fruit all along the lateral stems. Their life cycle continues to produce stems, leaves, flowers and fruit until ended by frost. Pruning is often necessary to keep these plants from becoming a 12-foot impenetrable tangle and to encourage the fruit to ripen. Late in the season, these plants often require a major ‘top pruning’ to encourage ripening of the developed fruit and to discourage new leaf and fruit production. Unless you plan to allow these plants to sprawl on the ground, they will need very sturdy tall supports.

• Semi-determinate varieties are somewhere between the other two. They produce fruit on both lateral and terminal stems, tend to be within 6’ of height and produce fruit mid to late season. One of the most popular varieties in this category is “Celebrity”.

Open Pollinated (OP) varieties are those that result from self-pollination (when both male and female flower parts appear on the same plant) or by pollination by insects, wind or other natural forms of pollination. If you save seeds from open-pollinated varieties and grow them following years, they will “grow true,” meaning that the seeds will produce plants with ‘traits’ as the parent plant. For tomatoes, their flowers are often pollinated within the same flower and seldom cross-pollinate with other tomatoes without the help of people. Saving seed from OP tomatoes usually produces the same as the parent. On the other hand, squashes have both individual male and female flowers on the same plant and need bees or other insects to pollinate them. Saving seeds of these types of vegetables often don’t reproduce the same as the parent – which can result in some pretty interesting squash-pump-cuc babies! Corn is usually wind pollinated and will cross with any other corn within miles!

Hybrid (F1) first generation hybrid occurs when two different individual parent plants varieties are intentionally cross-pollinated to produce a seed that combines the desirable characteristics from both parents. Common desirable traits are disease resistance, uniformity, earliness, high nutrition or color. Hybrid seed is often more expensive than non-hybrid seed, F-1 seed must be produced each year, and the process of cross-pollinating is often done by hand.

Heirloom/Heritage can be generally defined as open-pollinated varieties that have resulted from natural selection (rather than a controlled hybridization process) that produces a stable variety that can be reproduced year after year. Most of these varieties have been passed down through generations of gardeners. Some sources use 50 or 100 years as an arbitrary age marker to define what constitutes an heirloom variety. Others classify any cultivated variety as an heirloom if it was developed prior to the 1940s and 50s (starting in the 1960s, plant breeders began producing and selling many modern hybrid varieties).

NOE – No Organic Equivalate varieties that are most often newer hybrids that are not being produced as certified organic.

Certified Organic, Organic, Untreated? When you see the words “Certified Organic” on a seed packet, it has distinct legal meaning. This terminology can only be used for seed grown by producers who are in compliance with all the detailed rules and regulations specified by the USDA’s National Organic Program. Other countries have their own organic systems, and can be labeled as organic. All organic seeds are grown without the use of synthetic fertilizers and pesticides; the use of sewage sludge, irradiation, and genetic engineering are also prohibited.

Treated? These seeds are generally coated with a fungicide. Treated seed is available primarily to protect germinating seed from rotting when planted in cold or wet soil. The fungicide powder is saturated with a vibrant color so it can be recognized.

Pelleted (or coated)? These seeds are enclosed in a round pellet made of clay. This coating helps make very small seeds easier to sow and and handle. Sometimes a fungicide is also added and will be colored brightly.

Primed? Priming is a hydration treatment bringing seeds to the brink of germination, then they are dried for storage and distribution. This is done to break dormancy of many wildflower varieties simulating nature so the seed will germinate quickly when sown. Priming can decrease storage life and should be planted the same year they are purchased.

“Agriculture and seeds provide the basis upon which our lives depend. We must protect this foundation as a safe and genetically stable source for future generations. For the benefit of all farmers, gardeners and consumers who want an alternative, we pledge that we do not knowingly buy or sell genetically engineered seeds or plants. The mechanical transfer of genetic material outside of natural reproductive methods and between genera, families or kingdoms poses great biological risks, as well as economic, political and cultural threats. We feel that genetically engineered varieties have been insufficiently tested prior to public release. More research and testing is necessary to further assess the potential risks of genetically engineered seeds. Further, we wish to support agricultural progress that leads to healthier soils, genetically diverse agricultural ecosystems and ultimately healthy people and communities.”